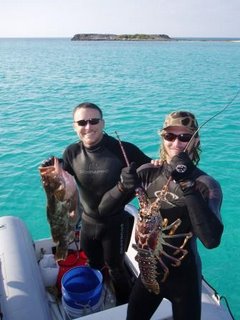 Rum Cay is just 20 miles southeast of Conception Island. We spent three days at Conception exploring its protected waters and Rod was getting anxious to get away from the Land and Sea Park rules of the island and go where he could fish!

We reached the northern shore of Rum Cay on the afternoon of Sunday, May 7. As our guide books advised we took a wide arc around the reef that extends a couple miles out off the northwestern corner of the island. Then the tricky part – we had to navigate through coral heads to get closer to shore to anchor. We knew it was possible as we could see Maja, Asolare, and Pathfinder already in the Flamingo Bay anchorage. Rod went up to the bow for better visibility and I manned (womaned?) the helm. I could see the coral heads pretty well just under the surface of the water but I needed Rod’s hand signals for affirmation of which direction to turn. He looked somewhat like an aircraft controller wagging his hands to the right, then left, then RIGHT! Breathe deep. Okay, he’s giving the OK hand signal to stay the course. Left, left, right, left, right, LEFT, LEFT, right, OK, OK, etc. And so this goes until we reach the shallow turquoise waters near the shore. We find a sandy spot in 7 feet of water (we only need 5) and we drop the hook. We make sure it sets well as we can see some exposed heads just 20 yards behind us.

This 10-mile-long isle only has about 100 residents, none of which live within sight of Flamingo Bay. All we see is a beautiful beach with an occasional wild cow on it. Rod gets some male bonding time with the guys (William, Anderson, Paul, and Greg) on the other boats by going on several spearfishing expeditions. The first day he got two groupers – one black and one strawberry. He returned from the following day’s hunt with a 12 pound Nassau Grouper! The associated story with this fish was quite dramatic; highlights included: deep water free-diving, fish swimming into a hole in the rock with the spear, coming to the surface several times for air, getting the spear but losing the fish, sharks, then retrieving the fish from the other side of the rock. In the verbal telling of the story that night over a potluck dinner aboard Day Dreamer there was much emphasis and animation regarding the sharks. But I’ll omit those details to save our mothers from having heart attacks. Moms, they were little itty bitty baby sharks that didn’t even have any teeth yet. One detail that should be mentioned is that the Nassau Grouper was actually a 2-for-1 deal. When cleaning the fish, Rod discovered a whole lobster in the grouper’s belly! That explained why he was so fat! No, we didn’t eat the lobster (yuck), but of course we took pictures to document the bizarre finding.

After spending two days in the isolated waters of Flamingo Bay we threaded our way back through the coral heads and went to the southern side of the island to explore its only settlement, Port Nelson. Dinner at Kay’s Restaurant and Bar was a real treat for us, Terra and William (Maja), and Greg and Cindy (Day Dreamer). On these small islands you have to be sure to make reservations for dinner so that the cook will have something to serve. We told Kay that afternoon that we would be back at 6:30 that night for dinner and when we arrived at 6:30 she had our table all set and she served us a fantastic meal family style; lobster bisque soup, fresh baked bread, fried chicken, baked chicken, green salad, peas and rice, baked pumpkin, and a delicious casserole that we were surprised (and saddened) to learn had turtle meat in it. Even though we were stuffed we managed to eat the coconut pie she served us for dessert. We were the only customers that evening for dinner, but the small sandy-floored bar next to the dining area drew in many locals.

Rum Cay is small now but it has been discovered. The Prime Minister was arriving the morning we left to be part of the ground breaking ceremony on a large housing/hotel/condo/marina project. Rumor has it that the planned development will employ 2000 people! The hard working entrepreneurs of Rum Cay will certainly benefit from the increased customer base, but I’m sure glad that we were able to experience this beautiful sleepy island as it is today.

Rod has craved adventure for most of his life. He grew up in the Idaho outdoors, hunting, fishing, motorcycle riding, mountain biking, kayaking, and telemark skiing in the Idaho backcountry. After college he became an accountant with a multinational agribusiness company and worked on projects all around the world. A desire for change led Rod to his second career as an Investment Sales Specialist with a large commercial real estate firm in Boise. Rod holds the prestigious Certified Management Accountant and a Certified Commercial Investment Member professional designations which he is certain will have no value on this current adventure. In addition to his professional designations, Rod is a PADI certified Advanced Scuba Diver and ASA Bareboat Certified. View all posts by Rod Wolfe

One thought on “Rum Cay, Flamingo Bay, hunting with Anderson”